Understanding the relationship between Milestones, Statuses, and Tasks and how they can work better together.

While the benefits of automating Milestone reporting based on Task completion is clear, let's take a deeper dive into the different ways Statuses and Milestones can interact to streamline your workflow.

Statuses serve to segment your tasks on your Tasks screen. If you've created a project from scratch (without a template), you will have the default Statuses of To Do and Completed.

To Do is a sample Status, and can be edited, whereas Completed is a default Status in every project. Additional Statuses can be created with the + Add Status button.

A Task can exist in any Status while remaining in the same Milestone. Below we see a task moved from To Do -> In Progress within the Milestone.

In fact, we can see and change the relative Status of the Tasks within a Milestone from within the open Milestone fly out. 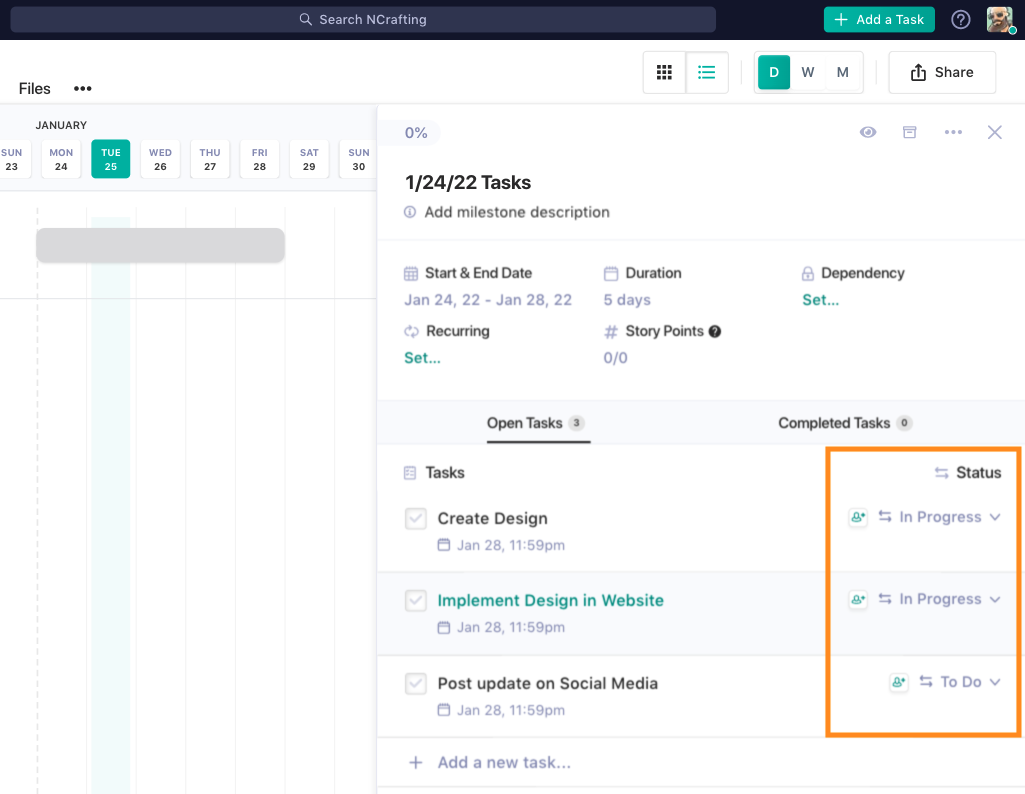 Used in this fashion, Statuses allow us to track a Task's journey within a Milestone all the way through completion.

Let's take the example from before, but instead of tying these tasks to a Milestone and creating an In Progress Status, we simply add the tasks for the week in To Do on our Task Board.

This Status can be converted into a Milestone which will automatically tie all of the tasks within the status to this Milestone. The below example renames the Status into the name of the workstream and converts it into a Milestone Status.

We can see that, once converted into a Milestone Status, the Status has an arrow on its header to indicate its Milestone relationship.

Note that Tasks can be moved into regular Statuses without changing the Milestone that this task is attributed to.

Group by Milestone as a Middle Ground

If you plan to utilize Statuses to indicate where a task is in its lifecycle but wish to visualize your Tasks by Milestone on your Tasks screen, Group by is the ideal solution for you.

In this example, each Milestone has 3 tasks within it, but on our Tasks screen, these tasks are all found in the To Do Status. By changing the Group by switch from Status to Milestone, we can now see these tasks broken out by Milestone. Note that this does merge Milestones with Statuses the same way Milestone Statuses do.

Go to Nifty
Did this answer your question?