All Collections
Use Cases
How to Manage Waterfall (Scope-Based) Projects

How to Manage Waterfall (Scope-Based) Projects

Automate project reporting and manage dependencies for your scope based projects.

Compared to its Agile counterpart, Waterfall or phased-based projects typically have a strong understanding of what will be due when, as the scope is mostly predetermined.

Some examples of this type of workflow are:

The key driver to this type of workflow are the phases of your project. We'll look to manage those as Milestones so that we can group these tasks in the context of the project's scope as well as automate reporting.

Below we see an example of a software rollout structure that looks to plan onboarding week 1, then spend the next three weeks onboarding different segments of their organization. This example has Auto-Milestones disabled.

Other examples of how your project might utilize these milestones are deliverables, development phases, or installation phases.

These milestones will be populated with tasks, but before we do so, let's consider how the workflow of this project will be executed.

There are a lot of ways to utilize Statuses, but an easy way to think about how you should implement them is to reflect on how your team currently (or is hoping to) work.

Fundamentally, Statuses group Tasks together in a meaningful way. Some teams like to use them to indicate a where a Task exists in its lifecycle. 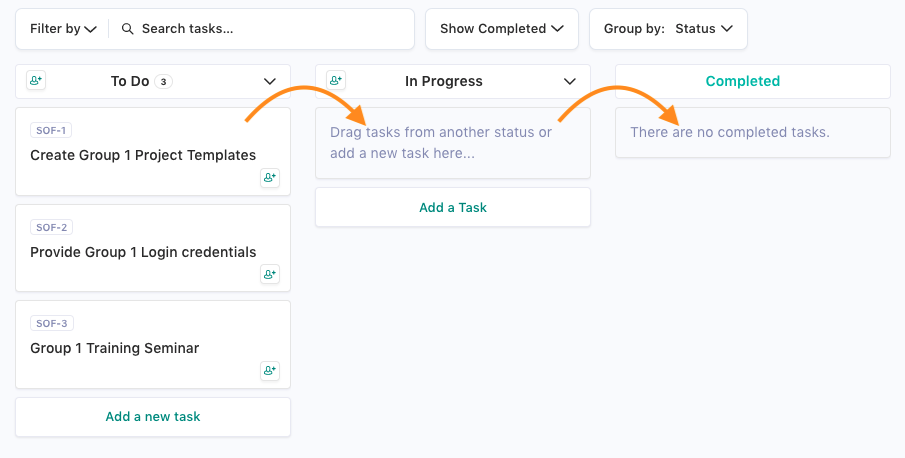 In this example, the expectation is that a Task will be moved into the Status based on if it has yet to be worked on, is currently being worked on, or if it is completed.

That said, this might not represent how your team or project works, and instead, you might prefer to use these Statuses to segment the types of Tasks.

In the case of our Software Rollout example, we might not be as interested in tracking In Progress for every task, and instead might prefer to see these tasks broken out by role or ownership, such as IT / Training / Completed. 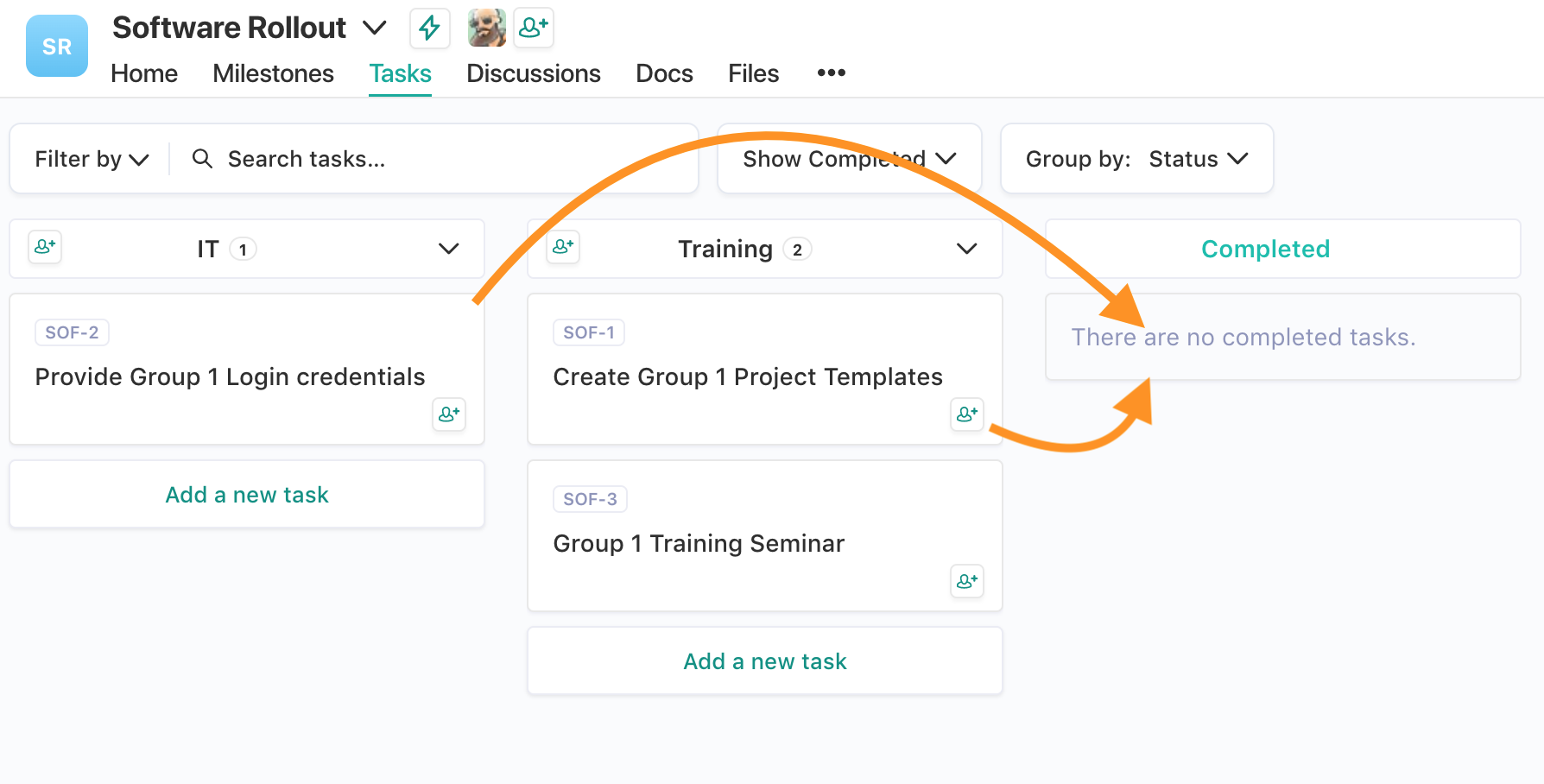 The expectation here is that Tasks will not pass through Statuses as Statuses serve to segment tasks into contextual buckets.

If you'd like to have insight into a Task's lifecycle and have further context of Tasks, consider utilizing Statuses for the lifecycle and Tags for the context.

This will allow you to view tasks in different ways based on your Task Filter by and Group by features.

There are several ways that you can add Tasks into their respective Milestone.

Adding Tasks in a Milestone from your Tasks screen

If you've already created or imported Tasks into your project's Task screen, you can use Bulk Select to tie groups of them to the same Milestone.

Adding Tasks from the Milestone Timeline

You can add Tasks directly in your Timeline screen of Milestones. Note that doing so automatically adds the Tasks to the furthest left (in Kanban) or top (in List View) Status, so this is not recommended for those who segment their Statuses based on task type.

Adding Tasks from Swimlane View of Milestones or Tasks

Swimlane View is a hybrid view between Milestones and Tasks which segments your Kanban Board by Milestones. This is a great view for adding Tasks if you utilize your Statuses as task types.

The final step is to connect your Milestones with Milestone Dependencies. This yields two key benefits:

Open up a Milestone and select the previous Milestone to set as a dependency. Now we'll see the Tasks of the open Milestone lock based on the completion of Tasks in the Milestone it is dependent on.

With your Milestones now joined by dependencies, they will shift in bulk if deadlines are delayed or updated. Milestones report realtime completion percentages, and you'll find that the dependency locks on tasks are released based on the completion of the previous Milestone.

Retun to Nifty
Did this answer your question?